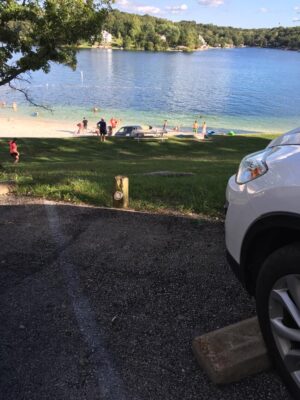 This summer, an out-of-control drunk driver sped through a packed lakeside beach in Hillsboro, Missouri.  The driver narrowly missed dozens of people, including many children who were building sandcastles on the beach.   A frustrated mother, who was at the beach that day, posted a compassionate letter to the drunk driver on her Facebook page.   This powerful letter speaks to the very real dangers of drunk driving.  It’s well worth the read.

Dear Drunk Driver,
There is so much I want to say to you right now. I want you to hear my version, one from a sober mother.

You scared an entire beach full of approx. 150 people because you chose to get in your car today and drive. You plummeted down a hill in reverse and were so intoxicated that you didn’t know the difference between the brake and the accelerator.

I want you to know that parents were scrambling to get their children. Parents were screaming “she’s not stopping” and it was complete mayhem. You caused that.

Thankfully, your car attached itself to a picnic table, which slowed you down or you would have killed approx 30 children sitting in the sand making sand castles.

You knew you were drunk and even said that you had 2 drinks and a shot before getting in your car. You were laughing when you said “at least no one got hurt.”

I stood there quietly and watched you drink endless bottles of water and eat an entire box of crackers while we waited for the police to arrive. What bothers me is that you seemed more worried about getting a DWI than wondering about the 75+ children that could have been injured or killed.

My children are my world. I’ve already had one child taken from me too soon and I am not strong enough to go through that again.

I truly hope you enjoy the “gift” you received from Jefferson County Sheriff Department. See, it took them 2 hours from our first initial 911 call for them to get to Raintree. I try to see the best in people, so I’m guessing someone else needed them more.

I couldn’t stay to see the JCSD administer a breathalyzer because my 11yr old twins start 6th grade tomorrow. Tonight, I am thankful that I have children to bathe and to prepare for their big day…An opportunity that you almost took from them.

Any other person would have been hauled off to jail, but you were the exception. Another sober mother told me the JCSD talked to you and after the tow truck moved your car off the beach, you drove away without a breathalyzer test being administered.

On the car ride home, my children had a lot of questions. One thing I made sure to tell them is…it is NEVER okay to drink and drive….ever! I am saying the same to you.